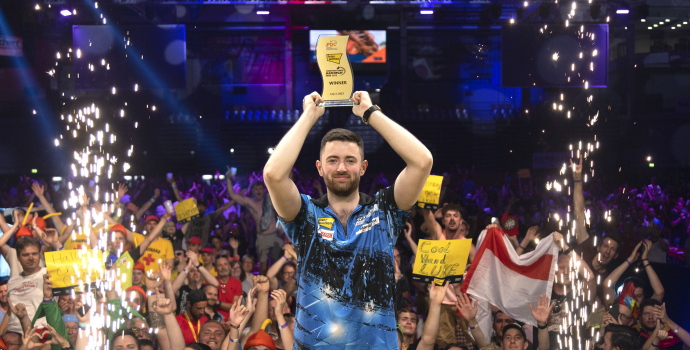 Humphries Hits Back To Claim Fourth Euro Title Of The Season

Luke Humphries recovered from 4-0 and 6-4 down to win the European Darts Matchplay title in Trier. The victory not only gives Humphries his fourth European Tour title of the season but also lifts him to 12th in the PDC Order of Merit.

Luke Humphries started the day as the highest remaining seed following Gerwyn Price and Ryan Searle’s shock exits on Saturday. His third round match saw him pitted against home favourite Lukas Wenig. Humphries broke in the opening leg and never looked back, securing a routine 6-2 win.

That win set up a quarter final clash with Ian White. Humphries may have feared the worst when White opened up with a 180 before winning the opening leg in 13 darts. Unfortunately for ‘Diamond’, that’s as good as it got, Humphries winning the next six legs on the spin. A match average of 101 for ‘Cool Hand’ and a semi final with Stephen Bunting up next.

Bunting had already secured decent wins against Martin Lukeman and Damon Heta to get this stage and they appeared to take their toll. With Bunting nowhere near his best, Humphries sealed his place in the final without dropping a leg.

Rowby-John Rodriguez was the man that stood between Humphries and the title, Rodriguez having already added to the impressive scalps of Danny Noppert on Friday and Gerwyn Price on Saturday by beating Gabriel Clemens, Nathan Aspinall and fellow surprise package Madars Razma in the semi finals.

It was the man from Austria who started the better. An opening leg hold of throw was followed by a break, secured by a 124 checkout. A 14 dart hold followed before a 13 dart break made it 4-0. Humphries got his first leg on the board and doubled his tally thanks to a magnificent 156 checkout to make it 4-2. Humphries got back on level terms before Rodriguez got his nose back in front with a hold of throw. He then followed that up with a 12 dart break, a stupendous 158 finish making it 6-4. Back to back legs from Humphries effectively made it a best of three shootout for the title and £25,000 top prize. Both players had opportunities as Rodriguez made it 7-6 to go within one of victory before Humphries fired in a 148 finish to set up a title winning deciding leg.

Despite his opponent having the throw, a sixth maximum of the match helped ensure Humphries was first to a double. Having gone outside with his first attempt at double 15, Humphries came inside his second to open the door for Rodriguez. Wanting 77 for the win, a final dart at darts was just too high and Rodriguez’s chance was gone, Humphries stepping up to hit double 4 at the second attempt and claim the title.