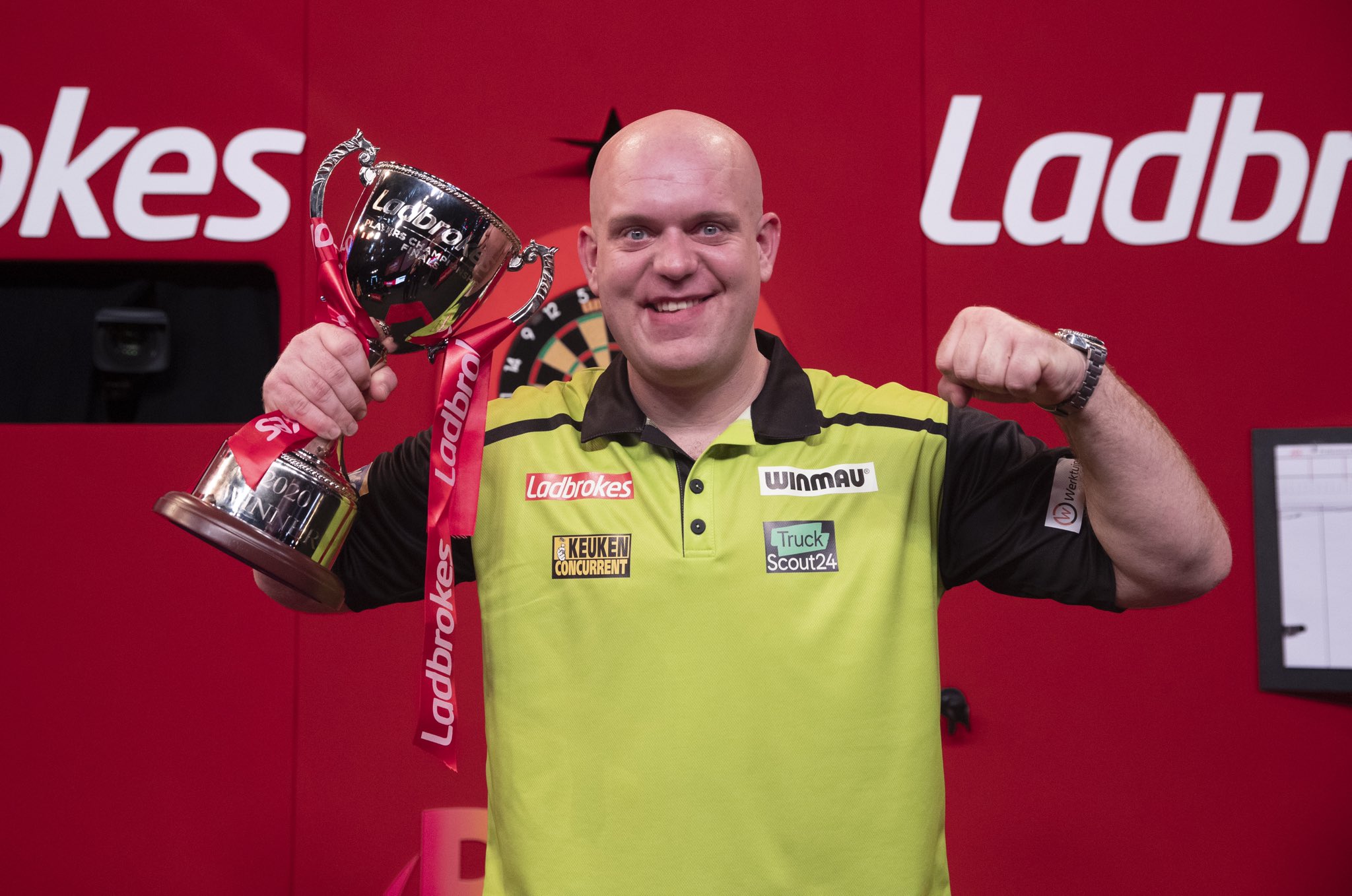 Michael van Gerwen “I’ve had to come from really far, everyone knows my year has been absolutely crap.” MvG reflects on 2020 Players Championship Finals success

Sunday evening’s victory was the sixth Players Championship Finals title overall for the Dutchman, and having endured a somewhat rocky 2020 campaign to date, Mighty Mike was delighted with his performance over the weekend in Coventry.

“I think to perform like this against a player who’s played an absolutely phenomenal tournament, it’s always a nice way to win. I had to come from far, and I did that.

“You have to keep believing in yourself, that’s what I always did. Otherwise, if you don’t believe in yourself, I couldn’t do what I did now. I think overall, I played a phenomenal tournament and I’m proud of myself.”

Second title of 2020 for World number one

Van Gerwen triumphed in only his second major tournament of the year, adding to the UK Open title he captured in March. Disappointing premature eliminations in TV events such as the Premier League, World Matchplay, World Grand Prix and Grand Slam cast doubts as to when or if the Vlijmen man would rectify a partial slump in form.

He admitted that although results haven’t gone his way in recent months, winning an event such as the Players Championship Finals in gritty fashion has done wonders for his confidence; but was coy on confirming if he was well and truly ‘back’ as of yet.

“Maybe, maybe. If I’m back, I want to win more tournaments. I always keep the pressure on me, it was lovely start, and I’m glad I finished it off and I didn’t make a lot of mistakes. I made it difficult at the end because I missed three darts to go 10-7 up, but a win is a win.

“When you play like this, it gives you confidence. Of course, it was tough, and I’ve had to battle back from far, but when you do the right things at the right moments, things can come to a good end. I proved to myself that I’m still one of the players to beat, I’m in good form, and I know there’s more in the tank for the next tournaments.”

Evidence of strong emotion poured out of Van Gerwen as he nailed the winning double eight, and he likened the feeling to his first major win in 2012 that set the foundations to go on and blitz his way up the rankings.

He also admitted that despite not being at his best across a number of the year’s events, he continues to be a dangerous threat and that he doesn’t need to make ‘statements’ to his nearest rivals, instead focusing on keeping his improved form rolling.

“It’s probably even better. Everyone knows my year has been absolutely crap for my standard, but I had to battle this year, and I had to do the right things at the right moments. Everything goes up and down, but I’ve come really far, and it gives me a lot of good feeling.

“You know I can do it, but I still have to do it. To do it with games like this against Mervyn who was playing a phenomenal tournament, beating Gerwyn Price in the semi final, playing phenomenal against Dirk van Duijvenbode in the quarter final, then you can be proud of yourself. That gives me emotion because I know how far I’ve battled. It gives me goosebumps.

“I don’t need to make statements. People like Gerwyn and Peter (Wright) know exactly what I’m capable of. They know when I’m playing well, they have a problem. I only need to make sure I keep believing in myself, do the right things at the right moments and the rest will come automatically. You still have to do it, that’s always the biggest part. Keep believing, that’s really important.”

King, taking part in his first TV final since 2014, was visibly irked at multiple points during the match as the World number one celebrated his winning legs with a trademark roar. The Dutchman seemed to have no knowledge of his opponent’s discontent whilst up on the stage.

“I wasn’t aware. People around me said after the game but I know what Mervyn is like. He doesn’t need things like this, he’s a phenomenal player by himself anyway. It probably only disrupts his own game, I think if he focuses I don’t make him miss things.”

Purple patch at the right time ahead of upcoming Worlds?

There’s the small matter of the William Hill World Darts Championship on the horizon, and MVG will be out to go one better than his disappointment in last year’s final in the bid to secure an elusive fourth world title.

He feels that he is hitting form at just the right time as the countdown to the annual festive showpiece begins, which gets underway on December 15 at Alexandra Palace.

And with the possible return of fans, Van Gerwen hopes that all the necessary requirements are met to ensure that becomes a reality.

“To go to Alexandra Palace with a win in your pocket is always nice, it gives you confidence. I didn’t underperform, I played lovely game, put pressure on my opponents, and did the right things at the right times, a couple of good finishes. I’m over the moon.

“If I win the Worlds, it would be great to put that on my list as well. Everyone knows I’ve had a poor last six months, but you have to keep believing in yourself to make the most of it, and I’ve picked up the right form at the right moment, that’s a bonus. I feel good, and I need to make sure I keep this going.

“It’s always tough if you’re not in-front of the fans, because everyone knows I love to perform in-front of the fans. But obviously at this stage, it’s not possible, and we all hope they’ll be back at the Worlds, but there’s a long time to go. We need to cross fingers, and make sure it’s going to happen.

“I’ll have 3 or 4 days off now, that’s for sure. I need to make sure I keep my own thing going. After a tournament like this you always need a few days rest, with my wife and my family. After that, back on the dart board to make sure you keep focusing.

“There’s still a long battle to go, and I need to make sure my preparation is like it was for the last few tournaments, then I can do some damage. I feel good, I feel comfortable, and I know I can do it.”