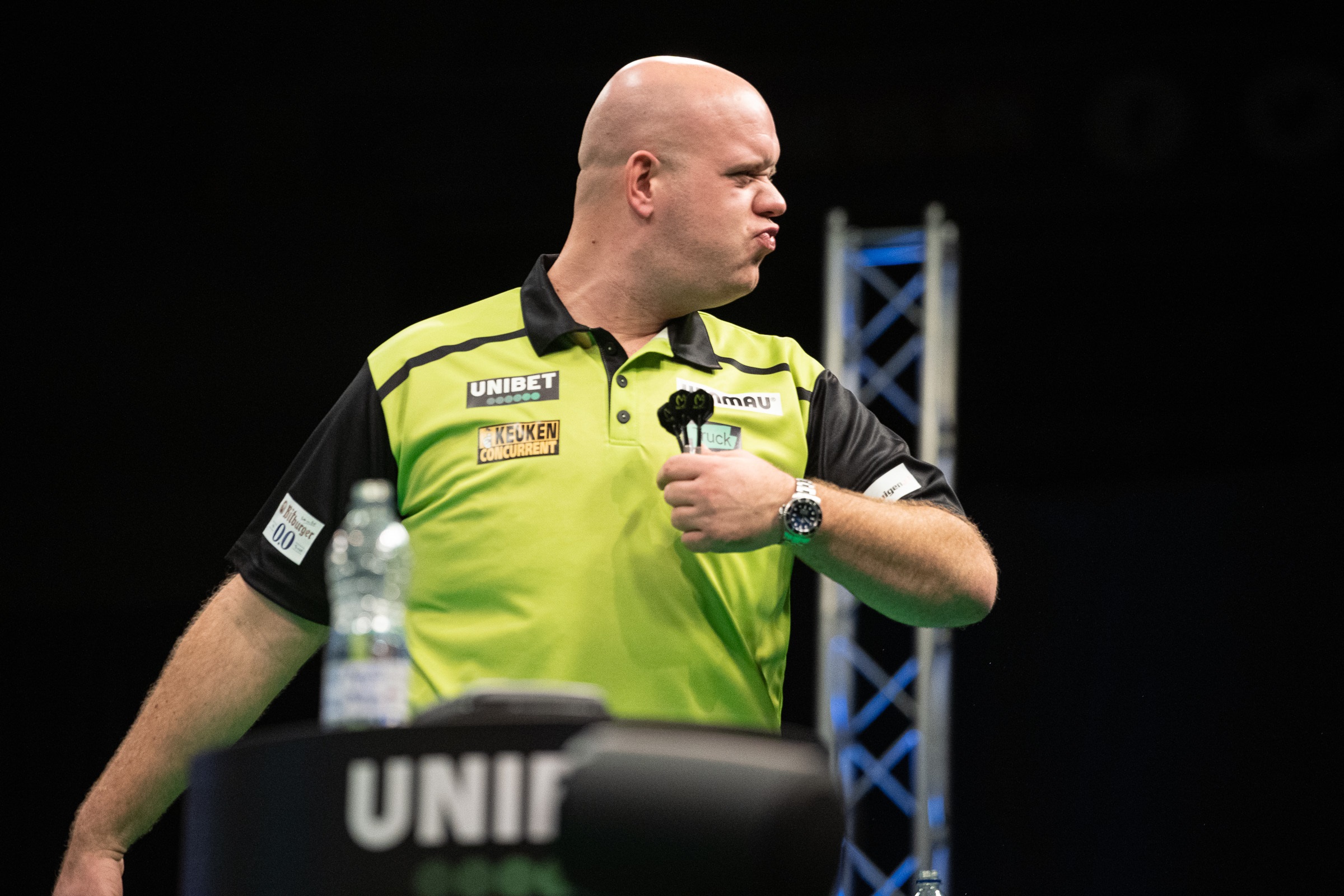 Michael van Gerwen and Gerwyn Price produced brilliant performances to win their round one games at the European Championship.

However, the best average of the day was delivered by Peter Wright. The World Champion hit a 104.4 to beat Gabriel Clemens 6-3, setting up a mouth watering clash with Price in round two.

Big three produce on day one of European Championship

Michael van Gerwen looked somewhere near his best in his 6-1 defeat of Darius Labanauskas. MvG started off brilliantly, hitting a 117 to take the opening leg. Lucky D would respond in the next leg though, taking out a lovely 130 shot to level.

Sadly for Labanauskas, that was as good as it got, as he was railroaded by The Green Machine. The Dutchman reeled off the next two legs, before punishing the Lithuanian’s miss at tops with a 60 finish of his own to lead 4-1 at the interval. Van Gerwen then cleaned up the match after the interval, winning two straight legs, ending the match with a 70 outshot to move into round two, averaging 104 in the process.

Gerwyn Price then followed MvG with an excellent performance of his own against Kim Huybrechts. The Iceman showed his intentions early on, hitting a 126 to break in the first leg. He then won three more legs, taking out a 100 shot in the process, to cruise into a 4-0 lead.

The Belgian would win the fifth leg, hitting double eight to trail 4-1 at the interval, but Price was not going to let him produce a comeback. He took 29 darts to win the next two legs, finishing the match with an 80 checkout to move into the next round. He won with a 103.6 average, and missed just one dart at double in the contest.

However, the best average of the day came from Peter Wright. The World Champion and German favourite Gabriel Clemens played out a brilliant game, where both players averaged over 100.

Both players held throw twice for a 2-2 games, before the decisive moment came in the next two legs. With Clemens on 40, Snakebite produced a brilliant 101 checkout to lead 3-2. Then, he missed four darts for the next leg, and was nearly punished, as Clemens missed double top for a 160 shot. Eventually, Wright hit double five to consolidate the break and take a 4-2 lead.

Clemens then held to stay in the match, before Wright reeled off the remaining two legs to get the win, ended the game with a 116 checkout to take a 6-3 victory, averaging 104.8 to set up a round two clash with Gerwyn Price tomorrow.

Round one at the European Championship also saw Jose de Sousa hit a nine darter en route to his 6-3 win over Jeffrey De Zwaan. After going 1-0 ahead, the Portuguese player then produced the moment of the round. After hitting 180 and then a 177, De Sousa found the 144 remaining, hitting double 12 for his first ever nine darter on TV, and the fourth in European Championship history to take a 2-0 lead.

De Sousa continued to impress, punishing missed darts from De Zwaan to take a 5-1 lead. However, the Black Cobra continued to stay alive, winning two straight legs to cut the gap to 5-3. Ultimately though, three missed darts at a double in the next leg cost the Dutchman, as the European Darts Grand Prix winner found double ten to wrap up the match at his seventh attempt.

Martijn Kleermaker produced arguably the shock of the day, beating defending champion Rob Cross in round one. Voltage started well, hitting a 130 checkout for the first leg before Kleermaker levelled at 1-1. Then, the big Dutchman took control, hitting a 97 to break, before pinging a 107 to go 3-1 up. Cross then missed three attempts to take the fifth leg, before Kleermaker hit a 100 checkout to go into the break 4-1 ahead.

The Dutchman won the first leg back after the interval, and despite a mini revival from Cross, held his nerve to hit double ten and win 6-3. It’s a repeat of the World Matchplay for Voltage, after he was knocked out in round one as defending champion in July.

The number one seed Joe Cullen fell in round one of the European Championship, losing to William O’Connor. The Magpie, who replaced Glen Durrant after Duzza tested positive for COVID-19, started well by breaking in the opening leg. Cullen responded with a break of his own, before two holds saw the match level at 2-2.

O’Connor then took control of the match by cleaning up 13 to break and lead 3-2, punishing Cullen missing six for the leg. The Magpie won two straight legs, and despite a break back from Cullen to keep the match alive, the Irishman kept his cool to hit an 81 checkout and knock the top seed out.

Steve West beat Krzysztof Ratajski 6-5 to move into round two. The Polish Eagle missed chances to break West’s throw in both the fifth and seventh legs, finishing 5/15 on the checkouts. The match saw 11 holds, culminating in West pinging double top to get over the line. He will be looking to make the quarter finals once again tomorrow, like he did in 2018 when he knocked out Michael van Gerwen on that occasion.

Jonny Clayton and Max Hopp produced arguably the game of the day in their first round clash. A back and fourth contest saw Hopp start the brighter, breaking in the first leg with a lovely 108 finish, before holding to go 2-0 ahead. The Ferret would come firing back though, reeling off three legs in 46 darts to go 3-2 in front at the break.

The German would not go away quietly though. He won the next two legs to go 4-3 ahead, before producing a stunning 170 big fish checkout to move within one of the match. Sadly for The Maximiser he could not find the match winning dart, missing two in two legs for the contest. This meant Clayton reeled off three straight legs, eventually finding double eight to win a classic game 6-5.

Michael Smith had to dig deep to win his round one clash with Ross Smith. Smudge went 3-0 up, before Bully Boy produced a fight back to trail 3-2 at the interval. After Ross Smith went 4-2 up, the former World Matchplay finalist produced the moment to turn the match around. First, he hit a 142 checkout to hold throw, before hitting a double double 19 for a 96 finish to level again at 4-4. This then gave Michael Smith the confidence he needed to get over the line, eventually pinging double top for a 6-5 win.

James Wade came through a stiff test against Irishman Steve Lennon. Both players broke each other in the first two legs, but could not find another in the remaining nine legs, despite creating opportunities. With the score at 5-5, Wade found double 18 for a 17 dart hold of throw, holding off the Irishman to move into round two. After winning this tournament two years ago, he will be looking to defend that money this weekend.

Jamie Hughes beat Dave Chisnall 6-5 in the opening game of round one at the European Championship. Chisnall took an early 2-0 lead, before Hughes fought back to level at 2-2. The pattern repeated itself in the next four legs, leaving the score at 4-4. Both players then held their throw once more, setting up a sudden death leg. There, Chisnall missed bull for an 86 outshot, allowing Hughes to step up and double 12 for an 81 checkout and the match.

Dirk van Duijvenbode produced a whitewash of fellow Dutchman Danny Noppert to move into round two. The World Grand Prix finalist was in control throughout, winning the first three legs in 45 darts, before going into the break 5-0 ahead thanks to a double two outshot, after Noppert had missed tops to get on the board. Van Duijvenbode then wrapped the match in the first leg after the interval, hitting double six for a 17 dart break and a 6-0 whitewash.

Nathan Aspinall made hard work of his round one match at the European Championship against Maik Kuivenhoven. The match was level at 1-1, before both players missed darts at a double to take a 2-1 lead. Eventually, it was The Asp that hit double two, before hitting double four in the next leg to break and go 3-1 ahead.

Kuivenhoven got the break back in the fifth leg, hitting double 14 to trail 3-2 at the interval, but the turning point of the match came in the next two legs. A lovely 11 dart leg saw Aspinall regain the break at 4-2, before eventually finding double one in the next leg to consolidate the break and lead 5-2, after Kuivenhoven missed three to break back. Despite the Dutchman holding throw, it only delayed the inevitable. The Asp hit double top to complete a 6-3 win and move into the next round.

Devon Petersen comfortably beat Andy Hamilton 6-1 in round one of the European Championship. Hamilton won the opening leg, but that was as good as it would get for Hammer. Petersen took out 170 in six darts to level the contest, before doing the same in the next leg to break and go 2-1 up. From there, the German Darts Championship winner went through the gears, winning four straight legs without giving Hamilton a shot at double. Petersen hit double ten to get the victory, cruising into round two.

Ian White defeated Mervyn King 6-2 in round one of the European Championship. King started poorly, missing seven attempts at a double in the first three legs. This allowed White to take an early lead, which included a magical 164 to go 3-0 ahead. King got on the board with a break of his own in leg four, but Diamond punished more missed doubles from The King to regain the double break and go 4-1 ahead at the interval. Both held throw in the next two legs, before Diamond hit a magnificent 143 checkout to seal a place in round two.

Mensur Suljovic closed a marathon day of darts with a comfortable victory over Daryl Gurney. Suljovic started the game better, holding throw in the opening leg, before hitting a 120 outshot to break for 2-0. Both players missed multiple darts in the next, before The Gentle hit double ten to consolidate the break.

Superchin eventually got on the board with a 20 dart hold, before Suljovic held once again for a 4-1 lead at the interval. Both players held their throw once more, before Suljovic broke Gurney to close out the game, hitting double three to win 6-2 against the Northern Irishman.