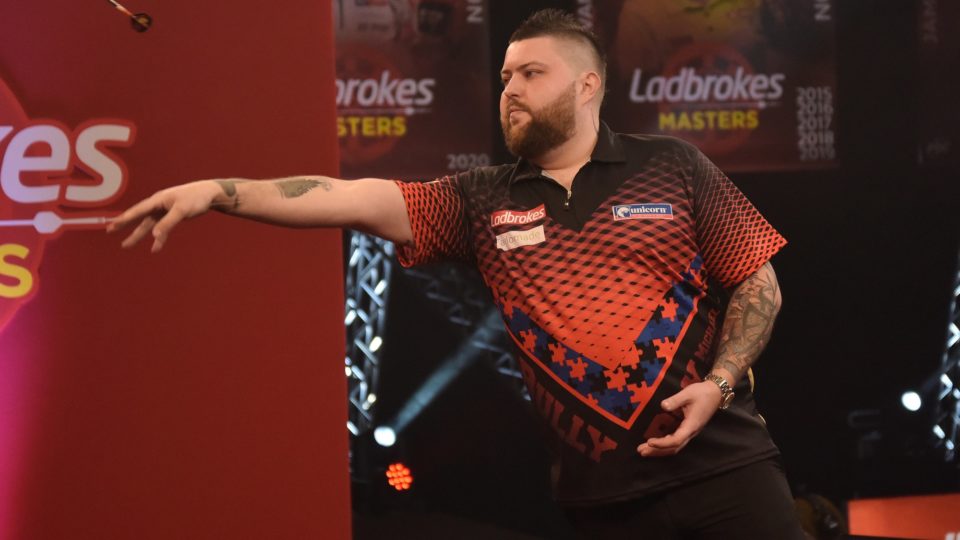 Four ton plus finishes for Michael Smith were not enough for him to overcome Adrian Lewis on day one of the Ladbrokes Masters.

Jonny Clayton also beat Jose De Sousa by the same scoreline, with the Ferret hitting a 130 outshot to win the match.

Elsewhere, day one at the Masters saw:

Adrian Lewis withstood those four checkouts to hold off Smith in the best match of round one.

Jackpot won the opening leg, before the first of Smith’s two Big Fish 170 checkouts saw him level the game. However, 28 darts later, the Bully Boy was down 3-1 missing a dart to level.

Despite this, Smith would level the contest either side of the interval. A fantastic 132 on the bull, followed by a second Big Fish, got the game back to 3-3. Another brilliant checkout, this time a 150 cancelled out a Lewis hold to level at 4-4.

However, Lewis kept his cool on his own throw, comfortably defending it twice to win 6-5. Both players embraced after the match, knowing they’d been a part of something special. Jackpot faces Gary Anderson in round two tomorrow.

The Ferret started well, reeling off the first two legs in 27 darts to go 2-0 up. However, the Portuguese player eventually found his scoring darts, winning two legs himself to level at 2-2. The Welshman though led into the break, finding a 13 darter to go 3-2 ahead.

Both The Ferret and The Special One missed chances to break each other’s throw, as five legs went on throw to set up a last leg decider. There, Clayton produced an astonishing 130 outshot to take the win. He sets up a round two clash with Michael van Gerwen, who he beat in the last 16 last year.

Joe Cullen produced arguably the performance of the night to beat Stephen Bunting 6-4.

An astonishing first five legs from The Rockstar saw him start the match with back to back ton plus checkouts, en route to averaging 115 as he raced into a 4-1 lead. Bunting would get going after the interval, winning two straight legs to get back to 4-3.

However, The Bullet missed a dart at tops to level, and Cullen punished, eventually finding double 20 with the last dart in hand to lead 5-3. Bunting would break again to get the game back on throw, but an 80 checkout from The Rockstar saw him take victory against the World Championship semi finalist. Cullen will face Gerwyn Price tomorrow.

Premier League Champion Durrant won the first leg, before missing a dart at tops for a 114. That would prove costly, as King after missing double 16, hit double eight to level. That miss on 16s was the only double The King missed all night. He went 3-1 up in 27 darts, before an excellent 120 shot saw him go 4-1 ahead at the interval.

The Players Championship Finals runner up then found a 13 darter to get a double break, before a lovely 105 saw him complete the victory. He faces Rob Cross tomorrow.

Daryl Gurney came through a tight contest 6-5 against Jeffrey De Zwaan on day one of The Masters.

Superchin won the opening three legs in 52 darts, punishing missed shots at the outer ring from his opponent. However, The Black Cobra took advantage of Gurney squandering three darts at double, pinging double nine and then double 18 to trail 3-2 at the interval.

De Zwaan levelled straight after the break, before going ahead with a 13 dart leg. Gurney though would fight back, finding double four for a 15 darter to level. Another break from each player set up a decider, where Gurney had the darts. This time, he produced an outstanding leg under pressure, leaving 32 after 12. He eventually found double 16 to complete the victory, setting up a showdown with Dave Chisnall tomorrow.

Simon Whitlock avenged his World Championship defeat to Krzysztof Ratajski on day one of the Ladbrokes Masters. The Wizard beat the Polish Eagle 6-2.

It was a comfortable start for the Australian, who went 2-0 up in just 30 darts. Both players then missed darts for the third leg, before Whitlock found double one to go halfway to victory. Ratajski got on the board with a 13 darter, before the Wizard hit a 13 dart leg of his own to go 4-1 ahead at the interval.

Two further holds gave Whitlock a 5-2 lead, before Ratajski could not punish the Australian for squandering a match dart in the eighth leg. He missed three darts to extend the contest, ending just 2/7 on the outer ring, as The Wizard hit double 10 to seal the victory. He will play defending champion Peter Wright in round two.

Dobey and Suljovic into last 16

Hollywood won the first two legs, before the Dream Maker fired back, winning two straight legs himself to draw level at 2-2. Dobey though went into the interval ahead, as an excellent 12 dart leg against the throw saw him take a 3-2 lead.

This gave Hollywood the confidence he needed, and after the interval he was excellent. He did not allow Van den Bergh a dart at a double, wrapping up three legs in 41 darts, ending the match on double 18 for a 13 darter. He faces James Wade in the last 16.

Ian White missed 23 darts at a double, as he lost 6-3 to Mensur Suljovic in the opening game.

In a game that did not set the pulses racing, both held throw in the opening two legs. The third leg saw White miss two darts to hold, and Suljovic found double nine to break and go 2-1 up. A 104 checkout saw The Gentle hold throw, before Diamond held again to trail 3-2 at the interval.

Suljovic, who himself was 6/17 on the outer ring, won two legs on the spin before White held to trail 5-3. The ninth leg saw The Gentle miss six match darts, but Diamond could not take advantage, missing eight darts himself to finish 3/26. Suljovic eventually found double two to set up a round two match against Nathan Aspinall.

The Masters Day One Results