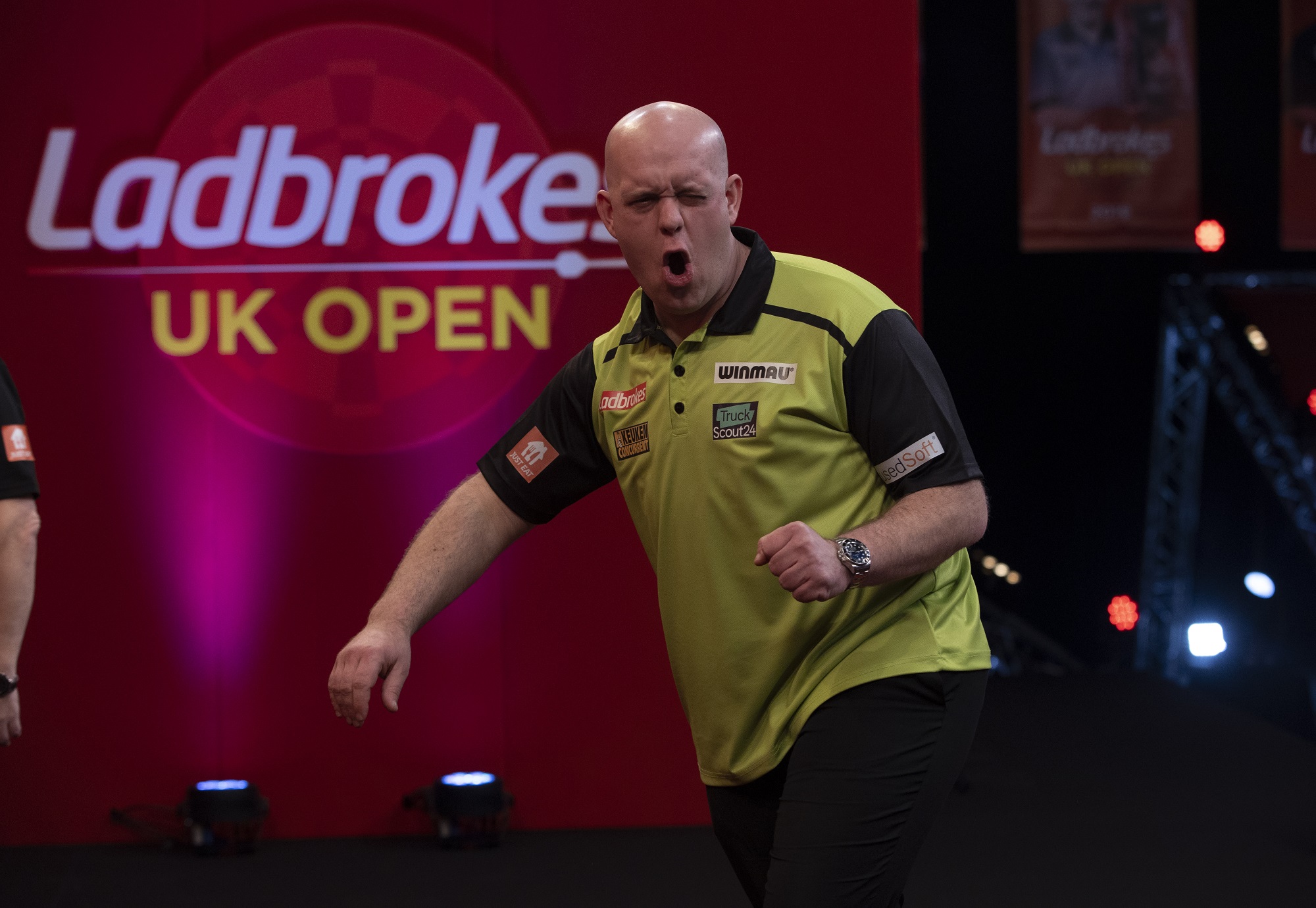 Gerwyn Price, Peter Wright and Michael van Gerwen were among the names to win on day one of the Players Championship Finals.

Price and Wright were tested in their games against Jason Lowe and Keane Barry. Van Gerwen meanwhile looked comfortable in beating Kevin Doets.

Elsewhere, day one at the Players Championship Finals saw:

Price and Wright come through battles

Lowe, who knocked out Michael Smith in the World Darts Championship last year, took the early lead, going 3-1 in front as Price struggled.

However, The Iceman took advantage of missed doubles throughout the rest of the game. Lowe had darts to take the fifth, sixth and eighth legs. However, he could not do so, as the Grand Slam Champion reeled off five legs on the spin to move on.

Peter Wright battled through to defeat Keane Barry 6-4 in a tight game.

After six holds, Barry missed six darts to win the seventh leg, and Snakebite pounced hitting double 16 to go 4-3 in front. However, the young Irishman hit a 13 darter to break straight back.

Wright though, showed his class in the 10th leg. Going 131,180,174 to leave double eight after nine, he hit it for a 10 dart leg. 18 darts later, the World Matchplay champion hit double two to move into round two.

Snakebite will take on Adrian Lewis in round two. Jackpot produced back to back ton plus finishes en route to a 6-3 victory over Kim Huybrechts.

Van Gerwen through at a canter

Michael van Gerwen hit outshots of 129 to begin the match, and 113 to end the match, as he won 6-3 against fellow Dutchman Kevin Doets. The Green Machine went 5-1 up, and despite a mini revival from Doets, the six time champion came through with relative ease.

MvG will face old rival Raymond van Barneveld in round two, after the five time World Champion arguably produced the performance of day one in Minehead. He hit a 103.99 average against Maik Kuivenhoven to win 6-1, setting up a fantastic clash tomorrow afternoon.

It was a tough start for the number one seed Jose De Sousa, who beat Devon Petersen 6-4. The Special One went 5-1 ahead and looked in complete control, before The African Warrior started to fight back.

De Sousa ended the match with an excellent 118 checkout, after missing three match darts in the previous leg. Darius Labanauskas awaits the top seed in round two, after he defeated last year’s runner up Mervyn King by the same scoreline in the afternoon session.

Clayton not at best but through, Anderson fights back

Jonny Clayton fought through a tough contest against Alan Tabern in the final game of the day.

The Saint took a 3-1 lead early on, but missed six darts in the sixth leg to go 4-2 in front. Clayton pounced to level, before The Saint broke once more after The Ferret missed darts himself to hold.

However, an 85 checkout got him level, before he won the match 30 darts later to get over the line. The World Grand Prix champion takes on Scott Mitchell tomorrow, who took advantage of six missed match darts from Martijn Kleermaker to win 6-5.

Gary Anderson fought back to defeat Stephen Bunting in a classic contest.

Bunting looked imperious at the start of the contest, winning the first four legs in 56 darts, including a 121 checkout. The Flying Scotsman eventually got on the board in the fifth leg, before breaking in 16 darts to cut the gap to two.

The two time World Champion would hold again, before a second 121 checkout from The Bullet pushed the former Lakeside World Champion to within one of the contest. However, he would not get a match dart, as 46 darts later, Anderson hit double eight to complete a remarkable comeback.

Anderson’s reward is a game against Ryan Meikle, who played the game of the day. He hit the highest average of the day, a 108.76, to defeat Dirk van Duijvenbode 6-5. The Titan himself averaged 105.04, in what will go down as a stage two classic.

Aspinall, Cross and Smith among more big names through

One of the games of round two will see Nathan Aspinall face Rob Cross in a rematch of the 2019 UK Open Final at this venue. Aspinall got a warm reception from the Minehead crowd as he defeated Jeff Smith 6-2, and Cross beat Jermaine Wattimena by the same scoreline.

UK Open champion James Wade made the second round in Minehead, winning 6-1 against Ricky Evans who hit just 1/18 on the outer ring. He will play Callan Rydz in round two, after The Riot comfortably came through Mensur Suljovic by the same scoreline. Suljovic averaged 77.37 in the game.

Michael Smith took advantage of missed doubles from Willie Borland to make round two, winning 6-3 in the afternoon. The number four seed will play Daryl Gurney in the second round, after the 2018 winner of this event beat Alan Soutar by the same scoreline.

The big shock of the afternoon session came in the fourth game on the main stage. Andy Boulton fought through to beat Joe Cullen 6-5 in a great game, as the number six seed went out early. The X Factor plays Vincent van der Voort tomorrow afternoon, after the Dutch Destroyer won 6-4 against Jelle Klaasen.

What else happened on day one of the Players Championship Finals?

Ritchie Edhouse produced a good performance to defeat Dave Chisnall 6-4 in the shock of the evening session. Mad House will take on Brendan Dolan in round two, after The History Maker won 6-2 against Chas Barstow.

Chris Dobey hit 10 180s, and averaged 103.5, but lost against William O’Connor in a fantastic game over on Stage Two. O’Connor hit 6/8 on the outer ring to take the win, and will play Krzysztof Ratajski in round two. Ratajski lost the opening leg, but then won six straight to beat Ron Meulenkamp 6-1.

Dimitri Van den Bergh produced an excellent performance in his first game back since testing positive for COVID-19. He knocked out Madars Razma 6-3, and will play Danny Noppert in round two. Noppie beat Rowby-John Rodriguez 6-2 with a 101.33 average.

Ross Smith beat Rusty-Jake Rodriguez 6-2 to reach round two of the Players Championship Finals for the second straight year. He will play William O’Connor, who survived Chris Dobey hitting 10 180s and averaging 103.5 to come through a last leg decider.

Despite losing a 3-0 lead, Gabriel Clemens eventually outlasted Steve Beaton in a last leg decider. His reward is a round two tie against Damon Heta, who comfortably beat Steve Lennon 6-2.

There will also be a Ryan derby on Saturday, as Searle takes on Joyce on stage two. Searle survived match darts against Simon Whitlock in the opening game of the day on the Main Stage, coming through a last leg decider. Joyce defeated Luke Woodhouse 6-4.