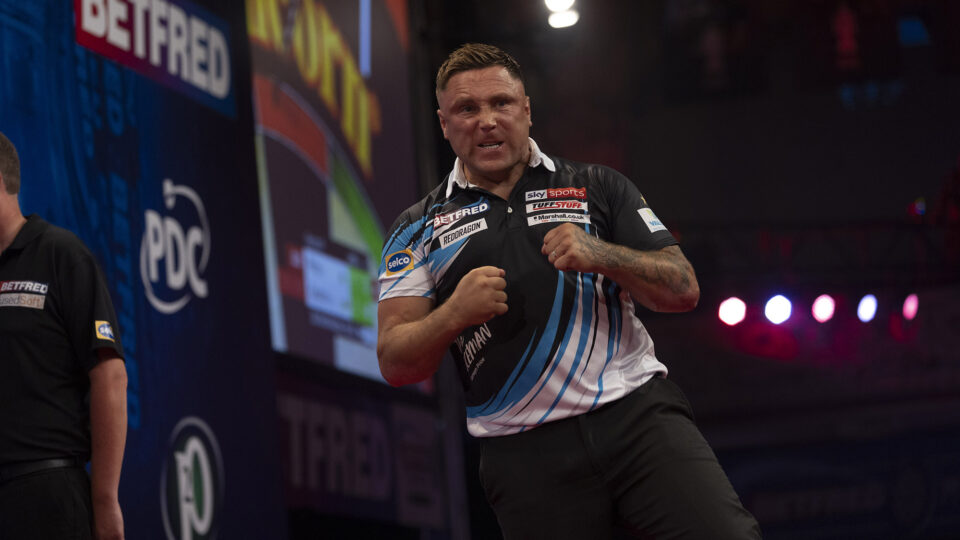 Gerwyn Price, Peter Wright, Michael van Gerwen and James Wade are among the last 16 players remaining in the first Euro Tour event of 2021.

Both Price and Van Gerwen were behind to Richard Veenstra and Daryl Gurney respectively, however the two fought back to come through 6-4 and make the second round.

Elsewhere, day two of the Hungarian Darts Trophy saw teenagers Keane Barry, Lewis Williams and Adam Gawlas also make it through, on a day which saw five seeds go out.

Top four endure mixed day but all go through

Price was 4-2 down to qualifier Veenstra, and in real danger of going out. However, after missing double 12 for a nine darter, settling for an 11 darter instead to go within one, he did not lose a leg, winning the match 6-4 with a 117 outshot. Price faces Damon Heta in round three, after The Heat beat fellow countryman Simon Whitlock 6-4.

MvG also fell behind early to Daryl Gurney, with Superchin going 2-1 in front thanks to an 11 dart break. However, The Green Machine levelled immediately, before three holds of throw saw him on the brink of the match. After Gurney could not find a 125 outshot, Van Gerwen hit double top to secure a 6-4 victory. He takes on Brendan Dolan in the last 16, after the Northern Irishman cruised past Alan Soutar 6-1.

Wade let a 4-1 lead slip against the Irishman O’Connor, before finding a 14 dart leg on throw to win the 11th and final leg. His opponent tomorrow will be Luke Humphries, who beat Devon Petersen 6-2 with a 101.08 average to secure his place in the last 16. Wade beat Humphries in the UK Open Final earlier this year, but Cool Hand got the better of The Machine at the World Matchplay in July.

Wright, the winner of that tournament, cruised past Florian Hempel to reach the last 16. He’ll meet William Borland, who came past crowd favourite Mensur Suljovic 6-5 in the afternoon session.

Teenagers play beyond their years

After winning their matches on day one, the trio of Barry, Williams and Gawlas continued to defy expectations on their Euro Tour debuts.

Barry beat World Grand Prix finalist Dirk van Duijvenbode 6-3 to seal a last 16 place. He will play Michael Smith next, after the Bully Boy comfortably defeated John Michael 6-3 in the final game of the day.

Williams was confident ahead of his game against former Euro Tour winner Krzysztof Ratajski. He was right to be, as the Welshman defeated the Polish Eagle 6-3. He will face Gawlas next, after the former World Youth Championship finalist battled through in a last leg decider against Jonny Clayton, in a game where the Premier League champion finished 5/30 on the doubles.